The COVID-19 pandemic has given us all innumerable "new normals." Even appellate practitioners, whom the Daily Record recently described as “relatively unscathed” by the pandemic, have had to change how they conduct business. This is especially so when it comes time to present oral arguments.

On May 1, Maryland's Court of Special Appeals (which had hosted its April arguments via Zoom) began hosting remote oral arguments via Webex. Because the public cannot watch these public hearings live (only arguing counsel has access), the court posts video recordings of its remote oral arguments on its website within days after argument. The Court of Appeals has long recorded and webcast its oral arguments in Annapolis. But it too will conduct its next round of arguments via Webex. See Clerk's "Guide for Attorneys Using Webex for Oral Arguments in Court of Appeals of Maryland" ("Clerk's Guide"). In both Maryland appellate courts, remote arguments present new challenges for appellate practitioners 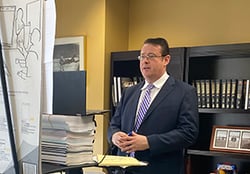 Preparing for my first remote oral argument in the Court of Special Appeals, I realized that, in addition to the customary nerves that accompany preparing to be grilled in open court by a panel of judges, I would have to be my own cameraman. Fearing that my total inexperience in film production would produce an audio-visual mess — forever preserved on the Internet — I looked not only to other appellate practitioners' online posts and articles but also beyond the world of appellate law for how to present via laptop. Some key principles quickly emerged:

Seeing remote oral argument as, in part, a 20-minute selfie, I looked to the world’s top authority on image and self-promotion: Kim Kardashian. When publicizing her 2015 book, "Selfish," a collection of 64 Kardashian selfies, she repeatedly emphasized two principles that appellate lawyers apparently now need to know: 1) Keep your chin down and 2) Hold the camera up a bit higher than face level. Kardashian explained that doing this ensures that her features appear more streamlined.

Although I can’t amplify the advice about chin placement (presumably lowering one's chin becomes counterproductive at some point that I can't define), the advice to keep the camera above eye level makes great sense. Reviewing the remote oral argument archives — or even watching current news interviews via Skype or Zoom — quickly reveals how unflattering an up-the-nose camera angle can be. If the camera angle makes you resemble a giant peering into a jar, change it. The dead giveaway that your camera angle is bad is if any part of the ceiling is visible in the background. Proper camera placement should also leave some space between the top of your head and the top of the frame.

For my argument, I wanted to stand, as I would in court. So, I built a tower of books on my desk and rested my computer on top, more than six feet off the ground. Whether you prefer to sit or stand, keep your camera slightly above eye level, as Kim Kardashian has wisely taught us.

Lighting is commonly botched in remote appellate arguments — but it is easily fixed. Avoid backlighting, which makes you a shadowy silhouette. Remember that, in literature, the shadowy figures are rarely the good guys. Do not have a window or lamp (desk or ceiling) behind you in your shot. Lights should be in front of you and fully illuminate your face without casting shadows or creating glare. A solid somewhat darker background helps with lighting your face. Bookshelves normally accomplish this while also framing the picture well.

3. What Would Prince William Do?

The timeless advice to just "be yourself" also applies in remote oral arguments. But do not forget that you are in public when on camera. Inviting an appellate court into your private office or home presents some potential problems.

Anything other than a blank background requires us to learn from Britain’s Prince William. In 2012, the heir to the throne released some posed photos of himself in military service to his country. But the soft self-promotion quickly soured and had to be pulled offline when media pointed out that the background of these candid office photos exposed such sensitive information as UK Ministry of Defense user names, passwords, and computer screens.

When presenting oral argument from your office, make sure that your bookshelf or background desk does not include your clients' confidential or privileged information. More than just the judges and opposing counsel will see what you allow in the frame of your picture; the entire world can also peer in. Act accordingly.

In vetting your background bookshelf materials, resist the urge to put on a show. Nothing should be added to your bookshelf that was not already on display in your office. Don't contrive an inauthentic image for oral argument. If you didn’t already have a picture of yourself with Mother Theresa or a U.S. President or an American flag in your office, don’t add one for oral argument. Objects that could be distracting also should be pulled from the shelf and replaced with more banal items. The Clerk's Guide generally advises practitioners to avoid an "overly personal" background. For my part, my Boston sports memorabilia was moved off camera on the assumption that a Patriots mini-helmet or Zdeno Chara bobblehead might irritate or distract a Ravens or Capitals fan. The Dr. Evil and Wayne's World bobbleheads also got pulled for argument, but my Chief Judge Bell bobblehead and family photos stayed in my bookshelf alongside various treatises and texts.

Finally, take time to learn from the mistakes of others. Watch the April 2020 oral argument to see what early mistakes were made, or even watch television interviews to see what works and what distracts. In the end, you want to create a visual environment that removes distractions, focuses the viewer, and lets your argument sing.

This post originally appeared on the Maryland Appellate Blog, the blog of the Maryland State Bar Association Litigation Section.